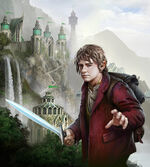 Bilbo Baggins is one of the playable characters in the upcoming game The Hobbit: Armies of the Third Age.

An unlikely hero hand-picked by Gandalf to accompany Thorin Oakenshield on his quest to reclaim the Lonely Mountain where the lost dwarf kingdom of Erebor is held by Smaug the Golden. Bilbo Baggins is a brave Hobbit from the Shire.


In The Hobbit: Armies of the Third Age, Bilbo is one of the first characters Elf and Dwarf players recruit to aid in the defense of Middle-earth.

Recruiting Bilbo requires completing several quests -- in this case, defending the Shire from Goblins and other threats.

Once Bilbo joins your ranks, he is a valuable and resilient ally: Bilbo's resourcefulness allows him to emerge unscathed from every battle, including those that do not turn in his favor, and enables your forces to loot more resources from enemy cities.

Bilbo Baggins is an available Hero in The Hobbit: Kingdoms of Middle-earth. He is one of the first available Heroes and can be assigned to positions in the Great Hall

Like all Heroes, Bilbo can lead your armies into battle and give valuable boosts to your troops and city. He also earns experience points from battle and via certain combat Items available from the shop.

Retrieved from "https://hobbitarmies.fandom.com/wiki/Bilbo_Baggins?oldid=13525"
Community content is available under CC-BY-SA unless otherwise noted.